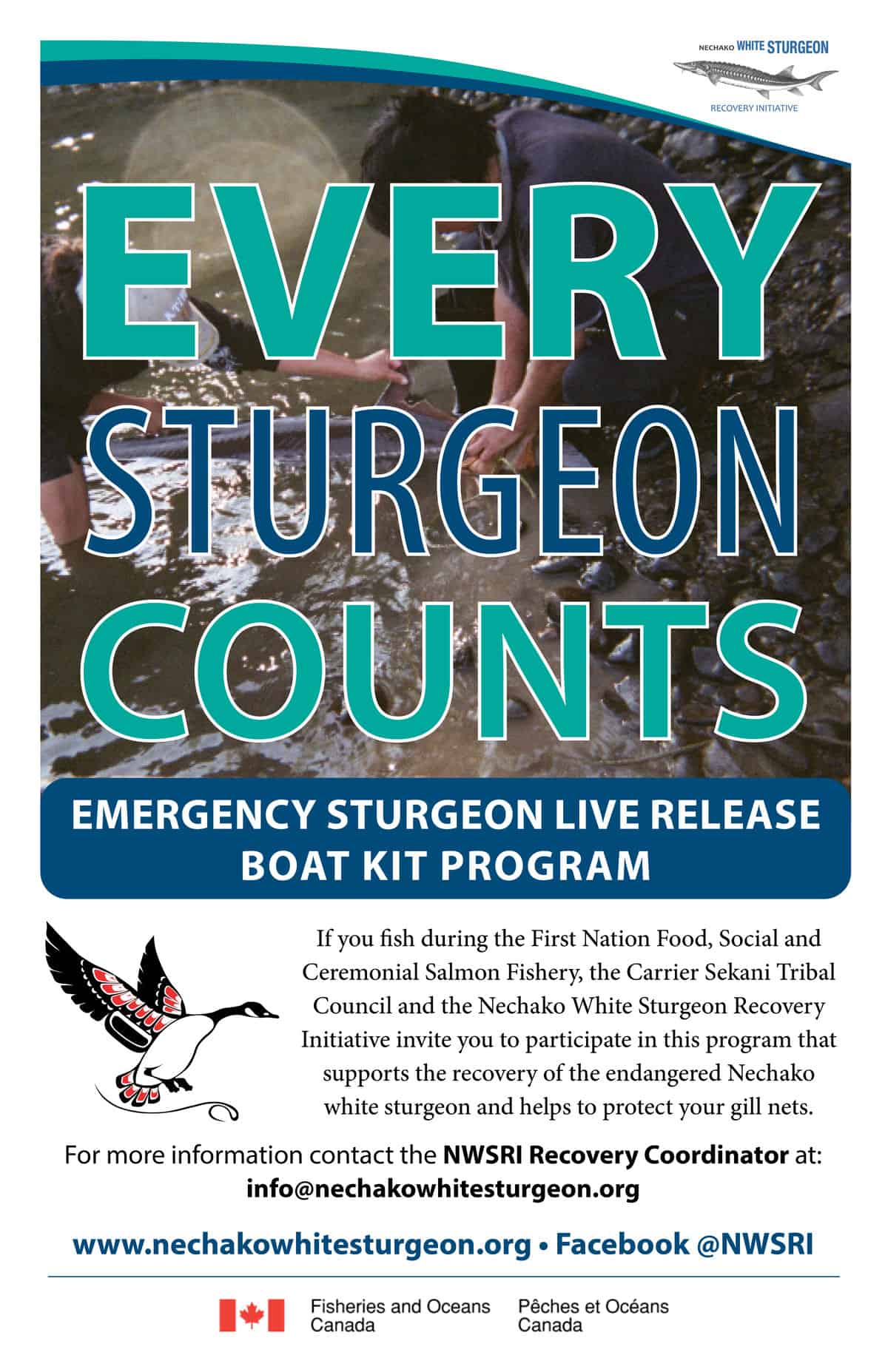 The Nechako White Sturgeon Recovery Initiative (NWSRI) and Carrier Sekani Tribal Council (CSTC) recognize that First Nation people have lived in harmony with white sturgeon, utilizing and sustaining the population in this system for time immemorial. The recruitment problems currently facing the Nechako white sturgeon were not caused by the sustainable harvest or practices of First Nation people.  Regardless the Nechako white sturgeon population is critically low and we ask that all people take an active role in the recovery of this magnificent fish. The Emergency Boat Kit Program is one initiative of several initiatives and research programs that are currently underway that are working towards the recovery of Nechako White Sturgeon.

The goal of the Emergency Boat Kit Program is to reduce accidental harm to sturgeon and the sturgeon population as a result of sturgeon by-catch associated with the First Nation Food, Social and Ceremonial gill net fisheries. Since this program began in 2011, there have been 71 successful live releases of juvenile and adult sturgeon that were caught accidently in gill nets. The success of this program is due to the continued engagement by First Nation families and communities that participate in this program.

Emergency live release in action! Check out this great video of a Nechako White Sturgeon being live released by a Nak'azdli band member. These guys worked calmly and quickly to release this fish with minimal stress. Thanks to the Aboriginal Business and Community Development Centre for sharing this video. Click here to view the video

We are extremely pleased with the results of this program! From its pilot in 2011 to December 2017 we have documented the live release of 78 sturgeon as compared with 8 mortalities. The program now extends into the fall char and ling cod fishing season for those Bands that participate in that fishery. 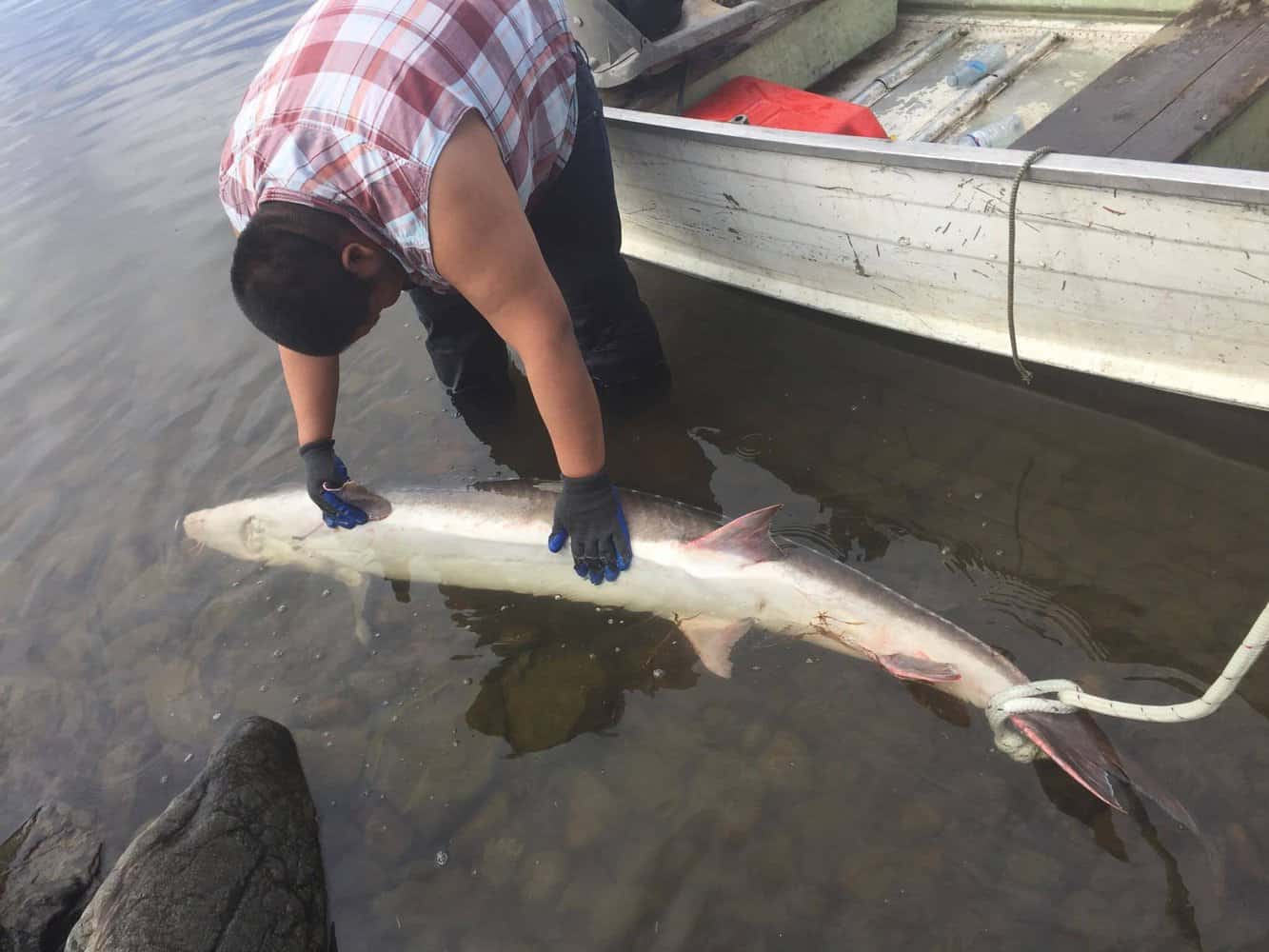 2011: the program was piloted by Saik’uz and Tl’azt’en First Nations.  During the 2011 gill net salmon fishery 11 sturgeon were live released using the ‘Emergency Sturgeon Release Boat kit’ by those two Bands and one sturgeon mortality was reported.

2014: 12 sturgeon were live released by fishers in Nak'azdli, Tl'azt'en, Lheidli T’enneh, and Stellaten First Nations. One sturgeon mortality was reported.

2015: 7 sturgeon were live released by fishers in Tl'azt'en and Lheidli T'enneh.  We are in the process of confirming the 2015 results. The 2015 FSC salmon fishery saw less people fishing because of the low spring/summer returns.

2016: 3 sturgeon were live released by fishers in Tl'azt'en, and one loss from the same area. The 2016 FSC salmon fishery saw less people fishing because of the low returns.

2017: 13 sturgeon were live released by fishers in Tl'azt'en and Nak'azdli. One sturgeon was lost in a research fyke net.

2018: 8 sturgeon were live released by fishers in Tl'azt'en, Lheidli T'enneh and Nak'azdli. One sturgeon mortality was reported.

2019: Zero encounters reported. Limited to no fishing in 2019 due to low salmon return. This was the year of Big Bar slide on the Fraser River.

Although the program is offered to the 7 First Nation communities each year not all participate. Our goal is the voluntary participation of all First Nation fisher families within the Nechako watershed.

The First Nation Food, Social and Ceremonial (FSC fishery) salmon fishery is known to result in the by-catch of mature, breeding sturgeon.  This FSC fishery is conducted using gill nets and as a result an unknown number of sturgeon are by-caught in these nets each fishing season.  The idea for the Emergency Sturgeon Release Boat Kit Program began when the NWSRI and CSTC was informed that some sturgeon were dying as a result of being caught in these nets.   When asked why accidental by-catch of sturgeon were not released alive from gill nets the overwhelming response was damage to the net and a lack of knowledge on how to successfully release a live sturgeon. This knowledge led to the 2011/12 fiscal pilot program: The Emergency Sturgeon Release Boat Kit program.

The Boat Kit program has three main components: (1) kit small enough to remain in the boat at all times and containing all of the tools necessary for a successful live release; (2) a video, Every Sturgeon Counts: Live Release of Gill Netted Sturgeon, and (3) an on-site community by-catch monitor that can explain the program, why participation is critical to the future survival of the Nechako white sturgeon, and help release sturgeon caught in a net.

Beginning part way through the 2011 fishing season, in an attempt to save the sturgeon in this system from extinction, the NWSRI in partnership with the CSTC requested that fishers live release any white sturgeon caught during the gill net fishery.  As a commitment to this Recovery Initiative the NWSRI and CSTC now provide up to 30 kits (20 kits in 2011 and 2012 and 30 kits in 2013) to First Nation fisher families.  We are not offering this program to sport fisheries for sturgeon because those have been closed in the North since 2000.

During the winter 2011-12, the NWSRI in conjunction with the CSTC hosted an assembly on the plight of the sturgeon of the Nechako-Stuart-Takla system at each Band’s community hall.  At this assembly we featured our “emergency sturgeon release boat kit” and discussed sturgeon biology and conservation measures.  We provided a PowerPoint presentation on sturgeon and played the video “Every Sturgeon Counts” that was created to go with our emergency sturgeon release boat kit.  A sign-up sheet was provided to identify fisher families interested in receiving a boat kit.  We also solicited member feedback regarding how NWSRI can be most effective at saving the remaining sturgeon of the Nechako-Stuart-Takla system, for example, we asked if there were specific outreach programs we should try to offer that would benefit sturgeon.  A member and Councillor of the Saik’uz First Nation Band delivered the majority of the presentations.

Beginning in 2014 the NWSRI, through our partnership with the Carrier Sekani Tribal Council, hired an on-site community bycatch monitor for each participating Nation.  This person can explain the program, why participation is critical to the future survival of the Nechako white sturgeon, and help release sturgeon caught in a net. This person is normally a member of the community. The NWSRI will continue to offer each participating community a by-catch monitor position as long as funding can be secured.

We designed an Emergency Sturgeon Live Release Boat Kit which provides the tools necessary for the successful live release of by-caught sturgeon and is small enough to remain within the boat at all times.  Kits were developed in conjunction with First Nation Fisher Families, CSTC and NWSRI members.  The Boat Kit also contains net mending tools and the webbing required to patch a gill net as damage to the net may result from the live release.  Each kit contains the following items enclosed within a see-through waterproof bag:

A roll of additional webbing is available upon request to further fix nets that have been damaged due to the live release of an entangled sturgeon.  Anyone requesting additional webbing must provide the required proof of a live sturgeon release.

Kits are the property of NWSRI and CSTC and must be returned at the end of each fishing season. Each year, the NWSRI will endeavour to obtain funding to replenish each kit. 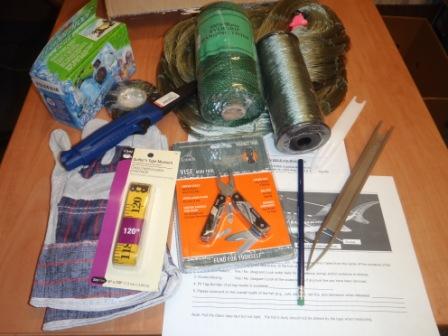 We created the video: “Every Sturgeon Counts: Live Release of Gill Netted Sturgeon”.  This video details how to live release sturgeon caught in a gill net and how to mend a net damaged as a result of a live release.  The video is 45 minutes long and contains footage of the live release of a large and small sturgeon from a gill net that were caught during the 2011 FSC salmon fishery.  It is partitioned into 6 chapters which allow the viewer to forward to the chapter of interest:  Defining the Problem - Recruitment Failure; Salmon, Sturgeon and First Nations; the Boat Kit; You’ve Caught a Sturgeon; Net Mending; and Stewards of the Sturgeon.  Providing the video in chapters allows the viewer to forward to their chapter of interest.  To view Every Sturgeon Counts: Live Release of Gill Netted Sturgeon on U-Tube click here: http://www.youtube.com/watch?v=YhrEJUEi-ow&feature=colike

Please be a Steward of the Sturgeon

The "boat kit" should be viewed as more than just a set of tools but also a method that further allows for people and communities to take a leadership role in the plight of the white sturgeon. We believe that this program provides a realistic solution to the current fishing situation – L. Ciarniello, past Recovery Coordinator.

Your help can make a difference now and for future generations.

If you are a First Nation Fisher in the Nechako or Upper Fraser watersheds and would like to participate in the Emergency Sturgeon Release Boat kit program please contact the NWSRI coordinator or Christina Ciesielski, CSTC Fisheries Manager at 250-562-6279.